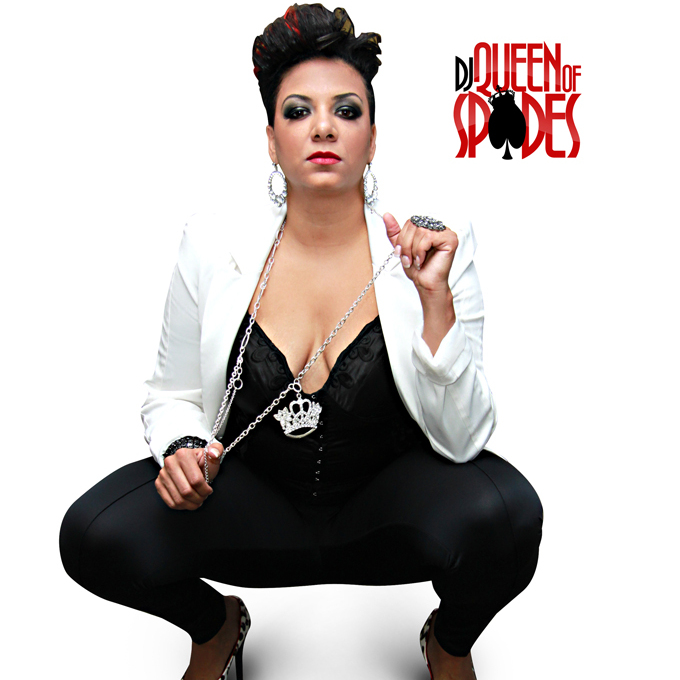 DJ Queen of Spades has not received any gifts yet

A “Diamond” in the rough

Christina “Queen of Spades” DiFlaviano has always had a love affair with music.  While growing up in Toronto, Canada she explored her inner creativity through dance and dramatic arts which gave birth to a lifelong affair with music.  Of Italian-Jamaican decent and rhythm coursing through her veins, she founded dance troops Nu-Matik and Anonymous, which led her to a brief stint in PR and Marketing with Maddox Entertainment.  However, her breakthrough moment came in 1996, when she would regularly frequent the local record store with her best friend, a DJ at the time, and the spark to learn the craft of deejaying was ignited.   A connoisseur of a wide variety of music, her passion lies deep in hip-hop, house and R’n’B.  It was just a matter of time before Christina DiFlaviano would emerge as The Queen of Spades.

Up in the “Clubs”

When you have big dreams, it’s wise to learn from the best.  Queen of Spades diligently studied some of the most acclaimed in the business including DJ Jazzy Jeff, DJ Scratch (EPMD), Spinderella (Salt ‘n Pepa), Kid Capri, Funk Master Flex (Hot 97) and her good friend DJ Starting from Scratch to learn the intricacies of mixing records firstly on vinyl, and then later moving to the digital age with CDs and mixing software.   Realizing quickly that female DJs were not as widely accepted as her male counterparts, DJ Queen of Spades has had to prove herself to the club-goers and her peers that she is a force to be reckoned with.  Her unique ear for music has opened the door to spinning at the clubs she once frequented as a dancer.  Her earliest gigs at the former Berlin Nightclub in Toronto grew into a string of bookings at numerous venues, a weekly residency, a featured DJ for the monthly Ladies Night live-to-air on The New Flow 93.5 (Toronto's only Hip Hop & R'n'B FM radio station), the annual Toronto urban showcase for female artists; Honey Jam  and now gigs in the most popular clubs, lounges and hotspots that span across Canada and The United States.  With all of this under her belt, it's no surprise that she has now been able to branch out and take her talents internationally.

The Music in her “Heart”

DJ Queen of Spades is all the way original.  She is self-taught and admittedly says that she often listens only to the instrumentals of new music to take it in from a mixing perspective, before she listens to the album version.  It must be this dedication to her craft that garnered her repeated nominations for Female DJ of the Year at the Stylus DJ Awards since 2007.  Along with a handful of other female deejays in the city, Queen of Spades has had the opportunity to play alongside some of her male peers that she once looked to as mentors.  She was also honoured at “The Annual Tribute to a Lady” Gala in 2008, where dynamic women in the community are recognized for their creative contributions. There is no question that music lives in this Queen’s heart and soul.

The Queen of Spades Takes Her "Throne"

DJ Queen of Spades has shown the world that she rules her own kingdom.  She has produced a popular CD series called “All Hail the Queen” which showcases her strength as a deejay, and her diverse taste in music.  This CD series illustrates how Queen of Spades remains on the pulse of new releases, and is an influencer that helps to break new music into the market while keeping you up to date on what’s hot on the charts.  She has been a member of The Core DJs since July of 2009, the World’s Largest Professional DJ Organization, where she is one of a very small population of Canadian DJs who regularly spins on their signature radio show on Sirius XM / Shade 45.  Queen, continues to be recognized for being a leader and top trendsetter in the industry.  She is now being endorsed by world renowned Monster Products, the company that used to manufacture Beats By Dre products as one of their "Famous Monster DJs" with the likes of some of the world's best DJ's.  She has also held a spot on the Administrative Team of Globe Radio, an internet radio station with several sub-channels catering to different genres of music.  As one of the pioneering members, she has helped to shape and develop the growth of the station since joining in 2007.  She was also Globe Radio’s ONLY female DJ with her mix show The Royal Treatment. The signature online show which originated in Toronto has been broadcast nationally through 3 different mixshows.  Along with her signature show, Queen also showcases her skills on Tulsa Oklahoma's #1 Hip Hop & R'n'B station KJAMZ 105.3; Mondays in The Old School Cafe.

Christina “Queen of Spades” DiFlaviano is an outgoing, friendly, down-to-earth woman who truly understands the art of deejaying having been immersed in the culture from all aspects; the listening ear, the dancer and now the party rocker.   It is a privilege to get to know her as a person and a DJ, for when you walk beside her, you walk amongst royalty.

All Hail DJ Queen of Spades!