Quic N Teaz are artists from Staten Island, New York currently residing in Binghamton, New York. A duo rap team, founders of New Money Music LLC, & New Money Clothing Brand. Creating the new sound in R&B, HIP-HOP & POP music, Quic N Teaz started their professional careers in the mid 2000’s, working with artists such as Papoose, Grafh, Rowdy Rebel and GS9. Quic N Teaz dropped their latest mixtape “80’s Babies” hosted by DJ Enuff. Since then they have recorded and dropped a multitude of music & music videos along with BTS footage of their journey through the music industry. They have been performing in many states including their own hometown in which they performed in front of a sold out crowd of over 3500 people. Quic N Teaz lead the “New Money Music Group” a team of young hungry dedicated artists, together they are most known as “NMG”. Their relatable lyrics & strong musical and performing abilities allow them to diversify their sound to create an aesthetically pleasing HIP-HOP/R&B/POP combination. Quic N Teaz currently perform in different states for their fans, enjoying the journey that their ability has allowed them to travel.

Quic N Teaz brings the NMG team on stage to perform in front of crowd of 3,000+. Said to be one of the craziest hip hop performances to ever hit the Floyd veterans arena. 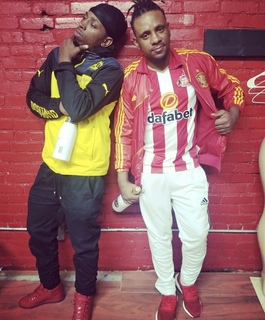