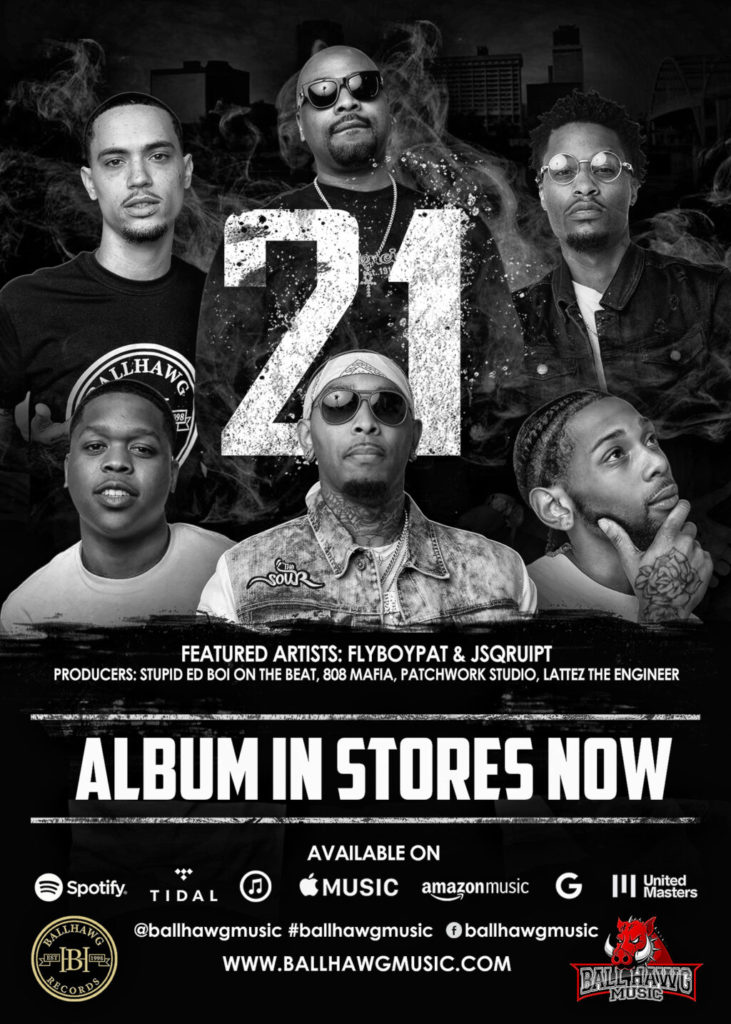 Stream: https://open.spotify.com/album/0vux9v89lVYrGdWJKwZPtu?nd=1
BallHawg Records Releases Compilation Album “21” streaming on all platforms, Providing the Shelters With Clothing For the Holidays & More! BallHawg Records, Inc. is an independent music label bred in Little Rock, Arkansas. As the first independent hip-hop label, they have been pounding the pavement hard and putting in work in the music industry as a versatile, lyrically inclined collaborative that can hold their own and compete for bar-for-bar with local acts and global sensations. This powerhouse’s roster features CEO Playboy Shane, producer Stupid Ed Boi On The Beat, three prime artists, Rixh Rose, Zay’lon, and Don Dolla, and two featured artists Flyboy Pat and J Sqruipt. Securing the bag behind the scenes are Imani, the touring, booking, and marketing director, road manager Chris, and logistics professional Gator P. Playboy Shane is a hip-hop veteran who debuted on the scenes at the top of the new millennium–between 2000 and 2003. Needless to say, he was a spearhead of the new generation of rap and hip-hop, gracing the Top 100 Billboard charts with epic singles, such as “What Cha Gone Do?” featuring the infamous H-Town artist Lil’ Flip. Since then, he has made a home for himself and provided opportunities for other artists to build on the foundation that he laid at Ball Hawg Records. They take pride in building from within, as everything is created in-house. This conglomerate is a full entertainment experience with not just music but visuals, engaging shows, and merchandise. Undoubtedly, the Ball Hawg Music enterprise has released a hot EP and album titled “21.” It encompasses 21 songs and celebrates their 21st anniversary as a music label. Although there are mostly freshman and sophomore artists in the group who are barely legal and have been in the game ranging from 3-7 years, these music professionals have put Little Rock on the map for rap and hip-hop, ensuring that the city and their artists will never again be overlooked regarding music talent. As Rixh Rose said, “tap in, [they] got them bands that make you tap dance.” Outsourced producers who they’ve established strong bonds and created dope music that is featured on the EP and album include 808 Mafia, Patchwork Studio, and Latez the Engineer. The group’s favorite singly off of the album is “Chanel 101,” so be sure to check that out. The album is currently available on all streaming platforms–Apple Music, Tidal, Spotify, Amazon Music, Google Music, and United Masters. Be sure to check out and follow the powerhouse on their social media handles @ballhawgmusic. Visit their website, www.ballhawgmusic.com, for music, events, bookings, and merchandise.
Connect w/ Ballhawg Music & Ball Hawg Records Inc.
https://ballhawgmusic.com/
https://twitter.com/ballhawgmusic
https://www.deezer.com/us/artist/78470132
https://tidal.com/browse/album/122388869
https://www.facebook.com/ballhawgmusic
https://www.instagram.com/ballhawgmusic
https://music.apple.com/us/album/21/1488922146
https://unitedmasters.com/m/5deeac1a8d1d10023c18c529
https://music.apple.com/us/artist/ballhawg-music/1487722761
https://open.spotify.com/album/0vux9v89lVYrGdWJKwZPtu?nd=1
https://www.youtube.com/channel/UCQUbeyfUevuCmaf4ys4UH8w/about