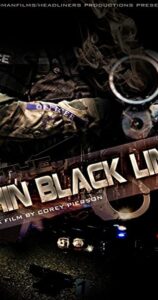 The turbulent times we live in is surrounded by controversy, racism and police brutality. “The Thin Black Line” is a riveting and compelling film that will take you on a rollercoaster of emotions.

When two overzealous Black Police Officers kill an innocent youth, they arrest and blame the crime on a white officer. Unbeknownst to them, the incident was witnessed by the local crack addict and with the truth being revealed other officers lives are put in jeopardy.

This suspenseful urban crime drama will keep you on the edge of your seat. This is a story of loyalty, betrayal, and murder. You will see firsthand the struggles of the street life and the fight for survival. Get an inside look into the world of police officers and the corruption and betrayal that goes on amongst each-other.