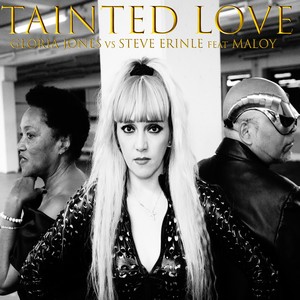 The making of this classic hit came by as Greg McKoy approached Steve Erinle with the idea of remaking Tainted Love with the Original and Legendary artist Gloria Jones.
The Dj/Producer Steve Erinle met Producer Greg McKoy years ago while working as studio musicians for the Legendary producer Frank Farian on his group Milli Vanilli back in 1989. It was then obvious that they both shared the passion in producing and creating music,so the two producers Steve Erinle and Greg McKoy decided to collaborate in 2018 and fuse Electronic Dance Music with Funk and Northern Soul.
The Producers decided to go with the talented artist Maloy for this project, because she is not only a great singer but also an amazing live Entertainer, who just seems to explode on stage with a Energetic dance and singing performance.
Maloy’s vocal and live performance got the attention of Legendary Queen of Northern Soul Gloria Jones and the Magic began as they all got together at Fat Vibes Music Studios to record a remake of Gloria Jones classic hit Tainted Love.
Gloria Jones is very happy to share with the world the remake of her classic hit Tainted Love, which she says is her favorite remix till date and just loves the approach to the remix, blending the old with new from the perpective of a Dj and Producer
This remix which has been tested by our Dj pool is garanteed to get the Club Dancefloor jumping, and has obtained from the lovers of soulful vocal Electronic Dance Music, a lot of positive feedback.