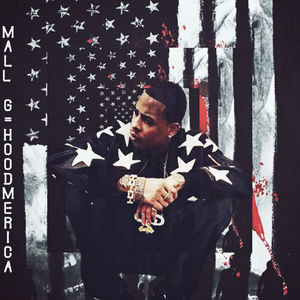 Seasoned Boston Rapper Mall G is back with his 10Th mixtape release entitled HoodAmerica with an album cover as thematic to match. He’s “pulling strings like a violin” as the song Money Longer says while keeping the features on this release tight knit to his G$D family as this tape is a personal one in tribute to his father who passed away on it’s release date July 22nd, 6 years ago.

HoodAmerica is gritty, less flashy than what Mall G fans are used to from the days he was Flossin with Max B but the lyrics punch like a pistol whip in this new style of flow he’s on. Not quite mumble rap, but in the essence of a lyrical MC with a modern monotone flow, fans can follow along with Mall G yet again as he tells a story with each verse. The beat selection for HoodAmerica, mostly produced overseas, and mixed by Lucky Genius (credits: Atlantic Records, Chamillionaire) is so melodic and consistent fans will think they are listening to a soundtrack to a movie. The track Call You is a fan favorite as it speaks to the relatable pain of accepting when someone’s loyalty is no longer. Similarly, the track Far Away From Em helps one to keep focus on those positive sources in their life. The track Cool Off is a heavy hitter smash feat family member Hue Hef who fans can hear on WuTang’s latest album as the newest artist signed to RZA. HoodAmerica by Mall G definitely earns it’s Stars and Stripes as a solid drop from the East Coast Rap scene. Salute!