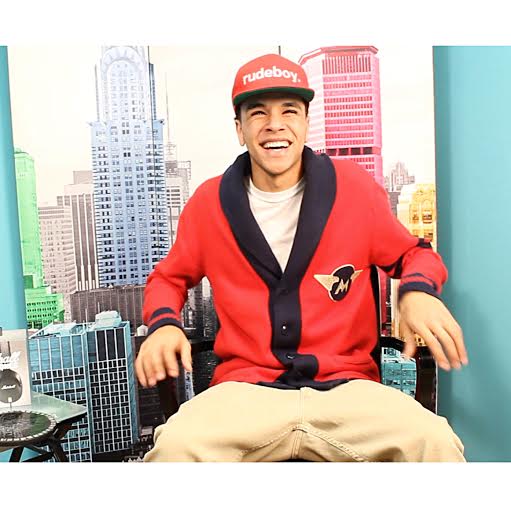 How did you get your start in the music industry? I would say my first start in the actual industry side of it came when I met Lil Will who is signed to Drumma Boy Drum Squad. He explained to me one key thing that stuck with me to this point. He said if you are just releasing music with no plan and putting it on the Internet you do it as a hobby. He also stated that it's crucial to always have a marketing and advertising plan for each release. Ever since then I've had a publicist to hype my releases.

What made you decide to want to be an entertainer and when did you start making music? I felt like I wanted to be an entertainer at a really young age. Ever since I can remember I always loved making people laugh as well as being the center of attention. I love being in front of crowds so the stage was never an unfamiliar place to me. I started getting into making music around 4th grade when me and a group of classmates created a band called "The Youngsterz" and I was lead singer. We recorded an EP with help of out music teacher and even did some performances. After that I a phase where I messed with rock music heavy which inspired me to get into playing both the guitar and the piano.

Who are your influences and have you ever collaborated with anybody in the music business? My influences are the rappers that are changing the game right now, bringing back that real meaningful hip hop that has a message that can connect with people on a deeper level, rather than just being a song to listen to at a party. Specifically I would say my influences are J.Cole, Kendrick, Logic, G-Eazy, Big Sean, Hopsin, Joey Bada$$. I haven't collaborated with anyone in the business yet, but I'm going to work towards getting some features from some Chicago artists this upcoming summer.

How was life for you as a child and do you find that your experiences help you come up with the content to make great music? Yeah definitely, my life has been anything but typical. I went to China for 3 months when I was 10 and for another 3 months when I was 13. I come from a family that travels a lot and is culturally educated, so growing up I always had an exceptionally open mind to anything. I've been able to learn a lot of my information from scholars in my family not just the biased media. My family is very musical as well as intelligent so learning how to speak well and be articulate came hand in hand with loving all types of music, from classical to folk to blues to jazz, my musical inspiration stems from all types of genres.

Do you feel the music out today is destroying the people minds in our community? If so why? I'm glad you asked me this because I definitely agree with that. Music is the most powerful form of art because it bypasses your filter and directly effects your emotions and thoughts, so when people put out evil, destructive music about killing, it makes the listeners think that doing that stuff is fun because they glorify it. It's a bad cycle because our black people listen to this music and try to mimic the horrible behavior that some of these rappers glorify and end up being another victim of police brutality. I'm not saying music is the reason for that, but the lifestyle that these rappers try and get their fans to mimic especially young kids who think because these guys are famous it's ok to live like that, which can be horribly destructive. This is why I'm trying to spread nothing but positivity through my music.

What singles do you currently have out and what projects are you working on?  My most recent single is called "Madhouse" I got a couple of my homies in town to hop on the track and we went crazy on it. I have a single called "Karma" I will be releasing in the upcoming month with director Cole Bennett of lyrical lemonade. I got another single I will be releasing right before summer is called "Famous" As far as projects go, I don't plan on releasing a project until like September when I come back from doing some summer touring.

What was going through your head when you created these songs? It's different for every song, some songs I might be in a down mood and write something motivational and uplifting, or I might be super happy and write a happy I love life kind of song. It totally depends on the moment and the inspiration.

What makes you different from all the other artist and why should the people buy your music? I think the thing that makes me different is the way I turn my thoughts into a song. I'm very good at creating a visual in your head with my words. I'm very descriptive, lyrical, and I many flows. I can rap super fast or slow it down, and I can make almost any kind of music from a hard banger, to a party song, to a song for the ladies, anything I feel like is in my comfort zone.

Have you ever been on tour before? If so how was the experience? I have not but I'm planning on going on a little Midwest tour this summer.

Where can people find you on social media?